How I am avoiding a stressful Christmas this year…

I know…it is only September…but I already have half of my Christmas shopping DONE!  The motive for starting so early?  I’m tired of stressing out during the holidays!

The reason I’m starting so early has to do with money.  If I began now, I could spread the cost of gifts over the course of several months, instead of spending a large sum of cash in November and December.  Since we do a monthly budget, I didn’t want to go WAY over in December (and throw the budget out the window), all because of Christmas.  I figure if I SpReAd OuT my spending, I could easily pay $50-$150 in Christmas gifts and it wouldn’t make much of an impact each month.

The last couple of weeks I started searching for a few gifts.  To my surprise, I was able to purchase several of my items half-off, just by shopping on eBay and Amazon!  If I would have purchased those same items in a couple months from now, I’d be bidding against NuMeRouS (stressed) Christmas shoppers, which would make the bidding prices go uP Up UP!!!  I have already saved significant cash on gifts, which allowed me to start working on the items I was planning to purchase next month.  Can’t beat that!

The other obvious advantage is avoiding to shop (and panic) at the last minute.  I feel less rushed doing it this way and can also make sure I get what I really want (since items are IN STOCK in September!  ha!)

Christmas can be the last thing on your mind since we haven’t even hit Halloween, but if your past experiences left you in financial ruins and stress, it might be worth considering!

Shop at Home and SAVE!

Those of you who know me or follow our blog know that if deciding between shopping at Target with my two kids or a root canal…the stress free option would hands down be the root canal!  I am always the mom with the kids climbing in and out of the shopping cart, yelling at them for running away from me, or in last weeks case the mom with the 5-year-old crying in the isle because I wouldn’t buy him some Captain America shield he JuSt HaD To HaVe!  So again…a root canal with a little laughing gas to take the edge off would be my pick any day! 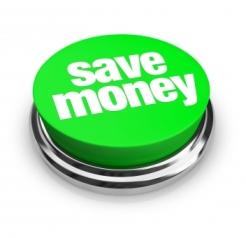 Thanks to my little shopping nightmares I have resorted to doing almost all of my Christmas shopping online.  What I have learned is…you can get amazing deals with PrOmO CoDeS!  When purchasing online, before you pay there is almost always an option to enter a promo code.  In the past I left this blank not knowing where to find a code.  Now with some hard work and a little luck I have saved tons of money and gotten free shipping on most of my purchases by simply typing the name of the store that I am purchasing from and the words promo code in a google search.  Once you do that tons of links come up to sites that are dedicated to listing current and expired promo codes.  For example…I ordered our Christmas cards from Shutterfly this year during their 50% off sale and earned free shipping due to the amount that I was purchasing.  The card that I chose was a little more than I wanted to spend so I typed into google “Shutterfly promo code” and found a code that got me an extra 20% off what I was already getting!  It was well worth the time and effort it took me to find the code!

As you get ready to do your last-minute shopping, remember…the stores need to get rid of their inventory just as much as you need to buy presents.  Take the time to search for SaViNgS!

I love gardening, but buying annuals and potting soil can add up when you hit the cash register.  This year to save money on potting soil when planting in large containers, I started filling the empty space at the bottoms with old balls that my kids no longer play with.  This worked out beautifully because I saved MoNeY on soil, my pots were much lighter, and I have fewer balls to pick up at the end of the day (shhh…don’t tell my kids)!