Why MOVE a house?

Well I’m not going to lie, we thought the idea was cRaZy too.  We had been trying to sell our home for over 1 ½ years and weren’t having any luck.   We wanted to move about 80 miles north so we could live closer to family and live on Doug’s 5th generation fArM.

Mid-February we discovered how sobering it was to take a loss on the house (in order to get it sold) and spend mOrE money to get the same house in our new location.  We liked our house.  It was the first home we ever bought and we enjoyed the layout.  It was nothing fancy, just a simple home with LoTs oF LoVe.  I’ll never forget the conversation when Doug laughed saying, “Too bad we couldn’t just take it with us!”

As extreme as the idea was, we researched to confirm that it was in fact CrAzY.  Much to our surprise we wasn’t so WiLd after all!  From day one we were impressed with Unruh House Movers and it became more and more apparent that this was the door God opened for us.   After meeting their crew, getting the final bid, and not having any hang-ups in the planning process, we were confident this was the direction we were suppose to go.

I don’t know about you, but all the things in my life that didn’t seem “forced” have been the things that bring me the most JoY (and the least amount of stress)!  We can all relate to situations that we tried to control, and they never seem to work out like we’d hoped. I cannot TELL you how many hang-ups we had while trying to sell our house yet, once we checked into a HOUSE MOVE, the process came with little difficulty.

We committed with Unruh’s House Movers on April 16th and found a crew that dug our new basement one week later. (see what I mean about it being a God thing?)! 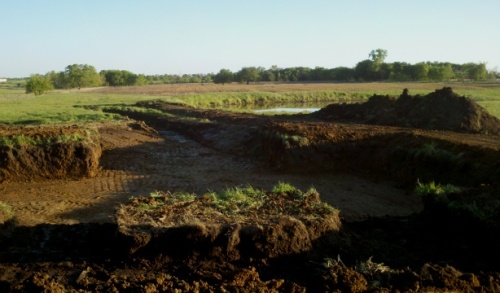 OUR NEW LOCATION! Didn’t hit any rock and got the basement dug in 1 day!

At home, the first thing we did was start pulling up ALL of our patio pavers.  If we were going to move, we wanted to take as much with us as we could!

Nothing like picking up over 200 pavers that we laid a few years ago! Eekk!

Come back next Friday for some more pictures of the demo work needed to prep our house for the move!

Filed under At Home, RANDO•RAMA

To most people, MoViNg DaY consists of packing up boxes and hauling furniture into a U-Haul or Budget truck.  When our moving truck pulled into the yard last week, this is what it read:

That’s right!  We MOVED our house!  Let me tell ya, God works in such amazing ways.  There is no way we would have made this decision if God didn’t make it so easy on us.  He guided us every step of the way and the outcome was better than we could have ever planned on our own.

In the upcoming months I will be sharing pictures of the process, the work required to make it happen, our definition of “moving”, and all the other crazy things I did (like giving our kitchen a major facelift only a couple weeks before the move!).

It has been an unforgettable time of our life, but like I said in a previous post, we’ve done well at soaking it all in and making the best of the chaos.

I look forward to sharing this with you!  Be sure to check in next Friday for more!

Filed under At Home, RANDO•RAMA